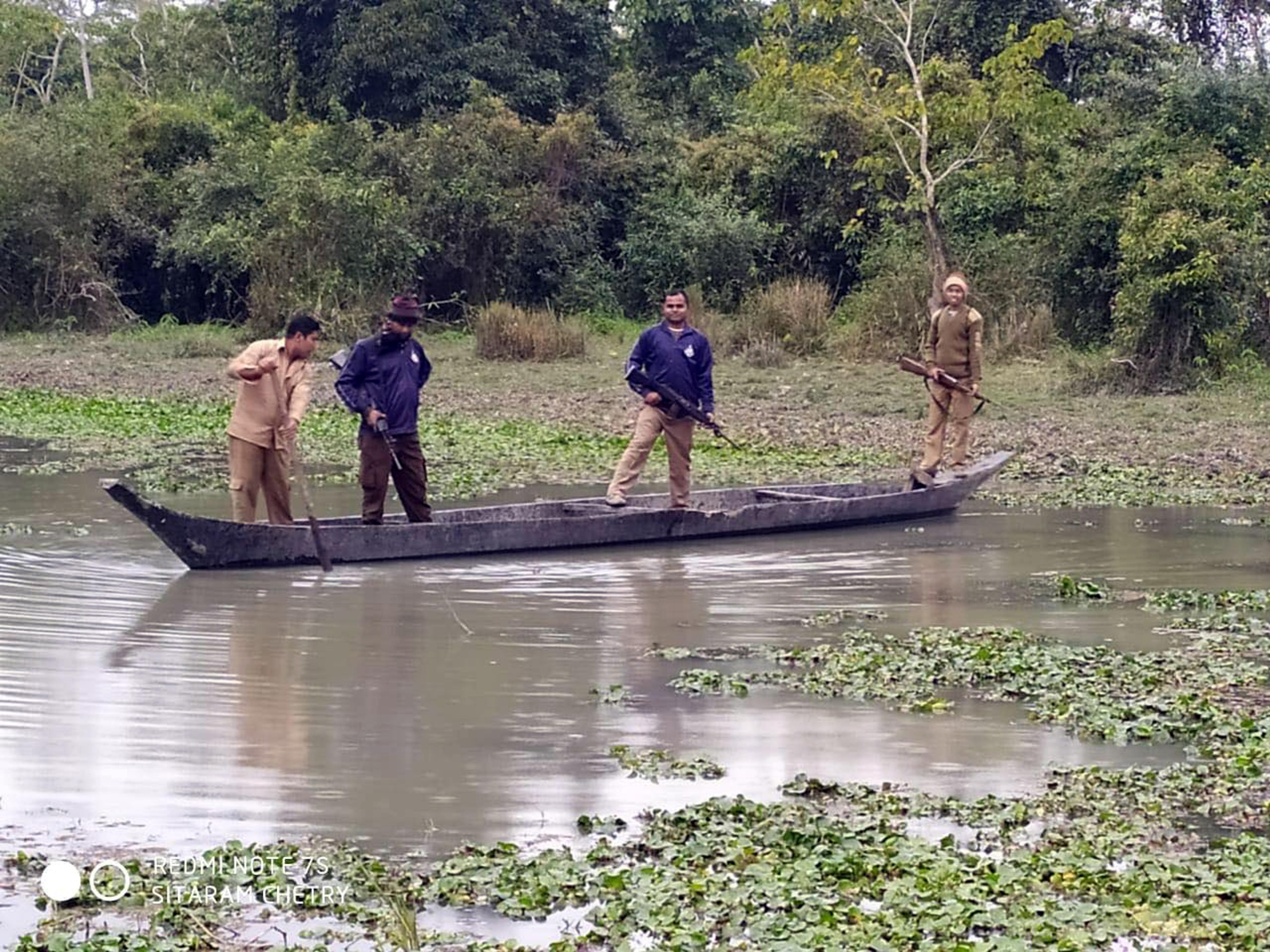 Rangers are at the frontline of biodiversity conservation and are perhaps the only actors that bridge the human-nature divide through their work in protecting charismatic species and engaging with local communities. A better understanding of rangers roles and positionalities in the context of places with ethnic conflict, corruption and natural resources management can aid better policy and practice outcomes.

Rangers risk their lives and safety to protect flora and fauna; they can serve as a safeguard against deforestation, air and water pollution, and even climate change and species extinction. Yet rangers take on these tasks in settings where their identities, social circumstances, and attitudes sometimes diverge from their formal responsibilities. The categories of 'ranger', 'poacher', and 'villager' may overlap, with individuals often belonging to the same ethnic group, and their roles changing depending on circumstances.

Definition of 'ranger' and 'community'

A 'ranger' can be a wildlife warden, forest guard, forester, scout, watcher, and other frontline staff involved in monitoring protected areas and the flora and fauna in them.

A 'community' consists of those belonging to different (mostly indigenous) ethnic groups, residing in and at the fringes of forests and parks.

This is especially true in contexts where natural resource governance is imbued with issues of violent conflict, particularly as conservation efforts have been increasingly militarised.19e5b6100f42Research on conservation currently provides few insights into why forest rangers may engage in corrupt practices, how this affects the performance of state forest departments, and what can be done about it.b21408ff9910

The case of Assam in northeast India offers some insights into the sometimes conflicting roles and pressures that rangers may experience and also suggestions about:

Looking beyond the ranger-poacher binary

Especially where conservation efforts have involved military-style enforcement efforts, binary categorisations of rangers as heroes and poachers as villains can emerge, yet the reality may be more complex.9eeb77b0b4c6 A ranger’s identity may be shaped both by their professional role as implementer of forest policy and their position as villager, embedded in rural social networks. Rangers interpret and explain policies to local communities, enforce laws, and pursue violators. Given that rangers often come from the same background as the communities in and around protected areas, acts of violence and arrests may divorce them from their other social relationships. For example, in interviews conducted by the author, rangers discussed the need to prove their loyalty to the forest department by arresting their 'own people'. Researchers in Kruger National Park in South Africa found that rangers do not always feel safe in their own communities; in certain cases, rangers have to ask their colleagues to arrest their kin, so as not to be seen to be directly involved in the prosecution process.0fb0a26c924d

This binary conception can also influence attitudes of those implementing conservation efforts. In the Virunga National Park in the Democratic Republic of Congo (DRC), for example, some research shows conservationists have drawn moral boundaries, rooted in colonial stereotypes, of black poachers and rebels versus the white saviours of the park management authority.2773a535c28c In Manas National Park in India, some forest authorities have been found to discriminate in their community interactions along ethnic lines.aad981e011f7

The impact of this binary conception of rangers can be counterproductive for conservation outcomes and local community engagement.36370dddb2ec

Corruption and conservation: Communities and rangers

Corruption is a high risk in conservation and natural resource management not only due to the high monetary values that can be involved, but also because it is deeply rooted in existing institutions, where class privilege, bureaucratic structures, patriarchy, and inequality constitute conditions that facilitate 'the abuse of entrusted power for private gain'd7f08cef27b3111f8db4f24f. In Assam, corrupt practices provide space for state agents and local elites to govern nature-society interactions as they wish. Corruption is not only a matter of the needs of the elite – the poor may also be encouraged to participate in order to meet basic needs or bestow themselves with small favours.

In this context, the conflicted roles in which some rangers find themselves help to explain how and why they behave in the ways that they do, including why they may engage in corruption. If networks of corruption already exist, rangers may be recruited into them or even get their jobs through them. For instance, interviews revealed how rangers in Assam had to pay a large sum in bribes to the officials of the forest department in order to be recruited. Such sums were often borrowed from the bank or from friends and family to be returned within a stipulated time, with interest.

Additionally, globally, 63% of rangers report having faced life-threatening situations, with over 20% feeling threatened by local communities.6fe84bb7b614 In June 2018, the Business Standard called India the deadliest country in the world for forest rangers. Between 2012 and 2017, the country accounted for nearly 31% – 162 of 526 – of ranger deaths, according to the International Ranger Federation. This is just one less than the total sum of deaths of the next five countries on the list: DRC, Thailand, Kenya, USA, and South Africa. Most deaths occur while preventing crimes pertaining to timber and wildlife trade, often operated by mafia-like networks, or they are accidental deaths while encountering wild animals or during self-defense.

In settings like these, there may be incentives for rangers to collude with poachers and engage in violent behaviours or corrupt actions while simultaneously protecting biodiversity.9f23ff87be2d Protected areas are restricted from activities such as grazing, logging, and the collection of non-timber forest products. This can lead to confrontations with criminals engaged in commercial extraction and with local residents who live off the land. Several studies show corruption to be a key factor in the loss of tropical forests through unsustainable or illegal logging.666da49cd707

Ethnographic research, spanning over a year, undertaken by the author in reserved forests in Assam, India, shows rangers to be torn between the demands of the state and those of the societies in which they live. Given that rangers have been found both to engage in corruption and to report it as witnesses, it is important to understand rangers’ working conditions and the broader context in which their engagement in corruption may either flourish or wither.cd9c2859bd09 These contextual conditions include their physical and economic working environment, their levels of training and support, whether corruption is normalised in related institutions, and the remoteness of their work locations.

In Assam, rangers often use timber from reserved forests to construct their own houses or for domestic consumption, although this is illegal and communities engaging in similar practices are fined by the same rangers.808d09fd3ef1 Concurrently, rangers’ duties include the detection, recording, and punishing of similar forest offences by others. There are frequent instances where forest guards collect bribes from local communities in exchange for access to timber. This sometimes involves links with larger timber syndicates. Rangers engage in forms of corruption to augment existing incomes.f224275d4f63 Given the remoteness of their hometowns, they often use the extra income on their children’s education.f4960902cdbd

This contrast between formal duties and informal actions may help to explain weak performance of forest management authorities where it occurs and, by extension, other natural resource management agencies. Communities’ subsistence needs generally ranked much higher in rangers’ estimation compared to a set of non-customary laws or rules imposed upon them. Rangers expressed the view that illicit harvesting of logs for everyday sustenance by poor communities was not morally wrong. They sometimes imposed rents in return for firewood to restrict the community’s access, since completely preventing local communities from accessing forest areas was not practicable. The rangers were aware that forests are a crucial part of the community’s life, given that they or family members pursued similar activities at home. Such attitudes are not unique to Assam, and studies from other areas of India as well as from Thailand, South Africa, Indonesia, and Tanzania, have noted similar legitimisation of informal forest use by rangers.22eb371faa25

Rangers in Assam may also depend on villagers for job security as well as for information on smugglers and poachers. The sheer scale of their jurisdictions often makes it difficult to keep abreast of all forest offences and activities. Rangers therefore tend to rely on personal networks in communities to keep themselves informed.

The question of prosecution of rangers for engaging in violence, poaching, and corruption needs further consideration. Interviews with rangers revealed that arbitrary prosecution or expulsion of rangers may lead some to join poaching units and collude with poachers against their own colleagues. Given that most rangers in developing countries are underpaid, using their training to make a living by joining poaching syndicates may be a compelling alternative. Moreover, rangers are usually at the receiving end of forest or wildlife policies that can harm their interpersonal relationships with communities.

Armed law enforcement and harsh prosecution of legal infringements as part of 'fortress conservation'e5b0345df94c approaches have been criticised and paved the way for the emergence of community-based natural resource management (CBNRM) approaches in the 1990s. Rewards and valorisation of violent behaviour may not only create highly conflicting pressures on rangers, but also overlook important alternatives that forest and wildlife management agencies can adopt to build more sustainable and less conflictual approaches to managing the priorities of conservation and community rights.

Even as we need more data on what makes rangers behave the way they do, the previous discussion indicates ways that rangers’ engagement in violent, criminal and corrupt behaviours can be linked to the frustrations born of working in isolated environments, far from their families, in spaces where personal and professional life merge. Repeated offences by poachers, threats from timber syndicates, and impunity for those engaging in forest crimes further aggravate this situation. Indeed, these behaviours vary significantly depending on caste, class, ethnic, and other forms of socio-political relations, particularly in the Indian context.

The Assam case, and others like it, show that it is crucial to understand the everyday power relations and identities within which rangers and communities are embedded when designing development and conservation activities. Several implications follow:

Go beyond directives from the top

Create feedback mechanisms for rangers and communities to help identify options for shared access to resources that will reduce incentives for corrupt actions. Messages from the top to the ground can be lost in translation between rangers’ formal and informal identities and loyalties. For example, frontline forest staff must navigate multiple identities while working on the ground, often driven by the context. A forest guard may share a cordial relationship with the community manifested through visiting the village for supplies and maintaining social ties. My research found that, in most cases, these rangers were found to be more liberal while allowing access to forest resources like firewood, grass, herbs, etc. including allowing cattle grazing.

The binary idea that rangers are a force for good, while poachers a force for ill, obscures a range of important issues.7b56e8384b51 In fact, ex-poachers or traditional hunting tribes’ indigenous local knowledge could be, firstly, used to inform and understand contexts in which illegal wildlife trade happens and, secondly, help trace these networks and commodity chains to garner more insights into wildlife crimes. This has the potential to both curb wildlife crime while including community participation.

A renewed emphasis on strengthening community-ranger interactions by better understanding the contexts in which conservation projects are embedded can go a long way to ensure better conservation approaches that help mitigate corrupt practices. In particular, local communities are storehouses of indigenous forms of knowledge on conservation and forestry, and these traditional knowledge systems could be better used in conservation practice. They are the 'eyes' and 'ears' in the forest and, if accompanied by safeguards against potential abuses such as local elite capture, approaches such as monitoring technologies can help to address illegal resource use in ways that involve communities themselves.

This work is licenced under a Creative Commons Attribution-NonCommercial-NoDerivatives 4.0 International licence (CC BY-NC-ND 4.0)